Now available on Facebook: a game I’ve been working on for the Council for Economic Education. I was part of the team that put together the economic content for this game. Choose any one of the “Beyond the Mission” game episodes, or start with “Road to Ruin” — I think you’ll find it easy to play.

Now in its second edition, this is a book I wrote with Mark Schug and Scott Niederjohn and Tawni Ferrarini. It shows how American history can be better understood by applying economic reasoning. You can find out more at our publisher’s website, amazon.com, or our Facebook page.

Have you heard of Excessmas?

The English language needs a new word, for the celebration of excess that occurs every December. I have suggested “Excessmas,” and my suggestion was published in The Wall Street Journal. Excessmas has nothing to do with Nativity because Nativity is the celebration of Jesus Christ’s birth — a joyful and nonmaterialistic holiday. People of all faiths can find value in separating Nativity from Excessmas. Read my article here. 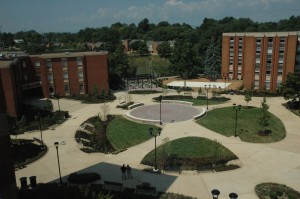 For years, waves of James Madison University students have walked back and forth on the plaza that connects the Chandler, Shorts and Eagle dormitories. Sometimes they were dragging, as on the way to 8 a.m. classes in the January cold. Other times they were jubilant, as when they finished their final exams and were free for Christmas break. The plaza was a gathering place, too, and even the home of fundraising seesaw marathons.

From my office on the fourth floor of Zane Showker Hall, overlooking that plaza, I have seen the students come and go. Some time ago as I was looking down, I realized that I had been given a gift. I like to call this gift “reflected happiness,” – feeling happier just because I was in the presence of happy people, even from four floors above.

This summer that plaza has been totally rebuilt. Many in the JMU community liked that plaza, and when the renovation was announced we were not sure we favored the idea of changing it. Students who had lived in those dorms remembered talking with friends or shooting hoops out on the plaza. It’s especially nice on warm spring evenings.

But now that the construction is complete, I can say that the designers and landscapers have done something almost magical. Instead of simply replacing the concrete, they made a design that combines grassy areas, tasteful plantings, and interesting curves around a circular forum area in the middle.

The old design did not have many natural gathering places, I now realize. A lot of it was just a big rectangle of concrete. The new design has benches and swings and many little nooks that seem to invite reflection and conversation.

The old plaza could be reached by someone in a wheelchair, but it wasn’t easy. The new design took out steps and a narrow ramp to Chandler Hall, replacing both structures with a broad sweeping ramp that’s pleasant walking for anyone but especially easy for wheelchairs.

There has been a great deal of construction at JMU this summer. As the students return, the most noted project will be the stadium expansion – and rightly so, because it changes the skyline of the campus and promises good things for the football program. But to me, the Chandler-Eagle-Shorts plaza project is just as impressive in its own way. From four floors up, I’m looking forward to a lot of reflected happiness from that plaza.